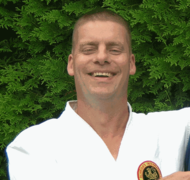 Sensei Wade Martin, was born in Eastern Canada. At the age of 4 he fell in love with and began playing hockey. In 1989 after immigrating to the U.S. Sensei began his training in Shotokan Karate with the NAKF. In 1995 Sensei Wade achieved the level of Shodan. SInce this time he has had the privilege of competing in New England, Las Vegas, Canada and the Azores. In 2006 Sensei Wade became a 3rd degree Black Belt. 7 hard training years later he achieved his 4th degree. Sensei believes in family, friends, hard work and hard training, He attributes all that he has achieved in his adult life directly to his training in the Martial Arts. Sensei Wade is forever grateful to Shihan Mello and Hanshi Almeida for everything they have done to help him achieve his successes in life.