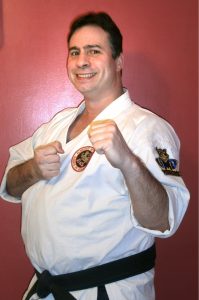 Renshi Tony Benevides is the chief instructor of the University of Massachusetts (UMD) Shotokan karate club. He began his training in 1976 under Sensei Bernie Wood in the art of Judo. He trained there several years. He has had a long active life in sports including playing 8 years of baseball, a year of wrestling and 4 years of track and field, was a 2 season team captain, MVP and elected to the conference All-Star team as best overall thrower. He currently holds 2 school records.

In 1989 he joined the UMD Shotokan Karate club (formerly SMU Shotokan Karate Club) under the training of Sensei Mike Savage, Sensei Peter Perry and former Team USA member Sensei Mike Luce. He assisted Colorado’s House of Judo grappling instructor Shane Pitts in forming UMD’s first Tae Kwon Do club. While in the UMD karate club, which was then under Master Kazumi Tabata as members of the New England Collegiate Karate Conference, he first met long time his current mentor and Master Kancho John Almeida and chose to follow his path while pursuing his black belt and karate future.

Renshi Tony also returned to Judo under Al Thompson of the Takigawa Judo club in 1996 where he was graced an honorary black belt in 2001.

In 2003 Renshi Tony took over as chief instructor of the UMD Shotokan Karate club from Sensei Peter Perry.

In 2005 the UMD Karate club decided to join the A.I.K.A. and the Club has been an active ever since.