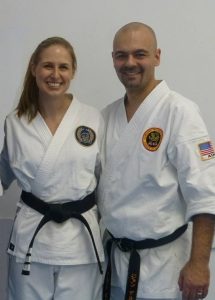 Renshi Rich Borges began his Martial Arts training in 1994, and holds black belt ranking in Shotokan Karate, Aikido & Kobudo (Weapons). The bulk of his training comes from Kancho John Almeida, Sr., Sensei Jack Leonardo and Sensei Joe Borges. Rich has also had brief training in several other martial arts such as Kickboxing, Jiu Jitsu, Kempo, Uechi-ryu, Kyokushin, Tang Soo Do and Tae Kwon Do. He continues his training with the A.I.K.A., as well as seminars by other instructors in various styles.

He has competed nationally and internationally over the years. He is one of the top Northeast competitors in forms, weapons and sparring on the IPPONE circuit. Most recently ranking 1st in each of his respective divisions and attaining the Triple Crown award for 2016 & 2017.

Rich is a Certified C.O.B.R.A.™ Self-Defense Instructor. He specializes in Self-Defense and has traveled internationally to help law enforcement personnel with armed and unarmed combat. He has also instructed classes for Children and Women’s Self-Defense.

While focusing on Self-Defense, he has continued to train and teach Shotokan Karate for the past 25 years under the direction of the A.I.K.A. He is the head instructor at Borges Martial Arts and currently runs the children’s program at Doshi-Kai in Acton, MA. His mission is to provide the best atmosphere and training experience for all students without bias to age, race, sex or experience level. While still very active in competition, he now dedicates his time to passing his skills on to the next generation.

Martial Arts has always been an important part of his life. He met his wife Allison at a kickboxing match in 1999. Over the years they would compete at several tournaments, cheering each other on. It wasn’t until 2014 that they began their life together, and now enjoy Martial Arts as a family with their daughters Lucy and Marisol.