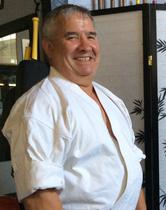 ​Mr. Almeida began his karate training with Sensei David Shuster. Following Sensei Shuster’s death, he trained with Sensei Robert Gomes. He became an active member of the North American Karate Federation and received his Shodan from Master Kazumi Tabata. In 1999, upon the recommendation of Master Sali Azem, he was honored with his 8th degree black belt (Hanshi) from Grandmasters Seiji Aikimine and Fusei Kise of Okinawa, Japan.

Kancho was very active in the competitive circuit throughout the 70’s and 80’s. He attained AAU and USKF National Champion status in kata, weapons and kumite.  He was named 1981 AAU “All American”.  Kancho Almeida has been called upon to provide law enforcement training to local, state and correctional training officers as well as law enforcement officers in the Azores. Additionally, he enjoys teaching self-defense for men and women of all ages.