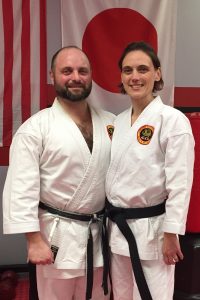 Sensei Chris holds his third-degree black belt from the AIKA federation. He began his martial arts career at UMass Amherst in 1996 achieving the rank of 1 kyu with ISKF Godan Sensei Sara Grimes, who was a student of Sensei Teriyuki Okazaki at ISKF headquarters, Philadelphia. Chris was granted black belt under Shihan Wayne Mello in 2001 while at his Worcester school, since then has had stops training with Sensei Mike Dumas and back to Shihan Mello, since 2015 has been senior student under Sensei DJ Oleski.

He graduated from the University of Massachusetts, Amherst with his BS in both Physiology and Chemistry. He then proceeded to attend Framingham State University and received his MBA. Currently employed at Sanofi Corporation as a Director of Industrial Strategy bringing medicine to people with Rare Diseases.