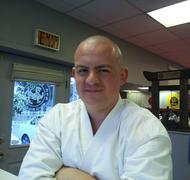 Sensei Kevin Carey, began his martial arts training in 2000, when Shihan Mello moved his karate dojo to Oxford, MA. He trained every possible chance he could, earning him the rank of Black Belt in 2004, at the young age of 15. Sensei Kevin started competing in karate tournaments right from the beginning and continues to enjoy competing today. Sensei Kevin became a 3rd degree Black Belt in 2013, earning him the title of Sensei. To this day, Sensei not only teaches and competes, but he continues to train and advance in rank as well.